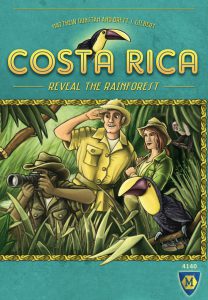 I’ve been accused of being too wordy in my previous reviews, so I’m trying something different with this review.

Costa Rica, spiritually, is Incan Gold with a board and somewhat cuter art. The restructuring of the round structure and the addition of the board increase the entertainment and the interactivity far more than such tweaks have the right to. Highly recommended hate-filler, suitable for families who want to make each other cry.

That’s it. Leave. Now. I’m turning the lights off…

Good, good. All the luddites have left now. If you’re still here, you clearly are game for reading a few more adjectives, nouns and… those other sorts of words I forget the name for, about Costa Rica, the brain child of Brett Gilbert and Matthew Dunstan. In the dark. The hot, sweaty dark…

Welcome to the Jungle! We’ve got Euro Games

Talking to the photo above, 61 of the games’ 72 tiles will be randomly selected and positioned into a hexagonal map, albeit with a bit of a struggle as it turns out making a hexagon with no underlay is a massive faff. The remainder of the tiles will not feature in this instance of the game. Each player is represented by a single colour. Their team of wildlife photographers is represented by the explorer-meeples (exploreeples?) of their colour. Think of yourself as ‘control’ or the sub-editor, like some poor man’s J Jonah Jameson. I’m not going to judge you for your weird Daily Planet fantasies.

The competing journalists will take turns being the expedition leader for the round, holding the black pawn of power in their vice like grasp. In addition to being able to fondle this most banal of totems,  the leading journo will decide on which party will be moving on the map and which adjacent tile said animal paparazzi mob will explore. The leader will flip the tile they moved the party onto, revealing one of the games six animal types, or perhaps a mix thereof.

The leader get first dibs on whether they take the animal tile, or pass. In clockwise order, other expedition members (represented by meeples still in the group) take turns deciding if they want the tile or pass. If any players (including the leader) claims the tile, fleeing back to base to upload their hot animal snaps to the Discovery Channel, their pawn is removed from the group and the expedition takes a break  (in shock, probably) and the totem of control moves clockwise to the next player.

If all players refuse the opportunity to scarper home with the pictures, then the current leader remains in control, moving the party one further node making an additional animal tile up for grabs. When a player finally breaks, they get to pick up all of the previously exposed tiles.

This round structure creates a curious ‘push your luck’ feeling, except it’s less about luck but rather more about your ability to read your friends greed and needs. Is James going to break for single monkey? It seems like a bad return for you, but it is the fifth simian in his set, so it’s worth a lot to him. However, I know James is a greedy swine and if he can rip me for a toucan as well? Surely he’ll hold. Yep, called it. WAIT, WHAT ON THE PANAMA ARE YOU DOING DAVE!?! You don’t even care about monkeys! Why did YOU take that? Oh, you’re next in line for the totem. I forgot about THAT…

You get the gist, I’m sure. It is a certain sort of fun, the pregnant silence around the table full of a delicious tension, a product of everyone trying to hide their hunger for the animal tiles revealed. Perhaps on another night, with another group, smack-talk will be the backdrop for this tense activity but irrespective, joy is the output.

Why do you want these animal tiles, representing some choice photo of a species of tropical fauna? Well, at game end you will be awarded points for specialisation in a given animal (e.g. how many Iguanas you collected), pay-off being formulated on the triangular number sequence, with a max pay-out of 21 points for six matching tiles vs one point for a singleton. I imagine this as being a representation of your reputation for catching ‘hot jaguar pics’ inside the nascent animal celebrity worship scene. If it’s good enough for house-pets, I’m looking at you ‘Menswear Dog’…

You’ll also be awarded points for achieving variety. No need to be a one-trick swamp frog in this game as each mismatch set consisting of all six animals will award YOU, yes YOU, a further 20 pap points. You can have it all, if your opponents are foolish enough to let you.

Further to you opponents working against you, when the leader takes their decision whether to claim or proceed, they have to take into consideration how hazardous the terrain they are moving to is. Risk is abstracted via a ‘push your luck’ game, whereby if you collect two ‘mosquito’ icons on the tiles in the chain, the leader catches malaria and goes home with all the exposed tiles excluding those bearing risk icons. Thereby their spell as commandant is ended and their meeple is removed from the expedition. These dangers are more prevalent in certain types of terrain, however to maximise your score you’re going to have to brave those mountains at some point. Just perhaps not when you’re already carrying a bit of the old ‘Mosquito Fever’, but that’s entirely your call, old bean.

For the mathematically minded among you, the odds of ‘failure’ are colourfully displayed on the player aid, although I will be the first to admit the mark-up is not entirely intuitive to the uninitiated. Budget three minutes in your briefing to field questions on this element of the game, as it should be considered by the leader when making decisions, unless they are a wild loose cannon. Or a child.

Something that annoys me is that the mosquito is used as the graphical representation of danger and the mountains are considered the most hazardous of locations, with the jungles as the least. I’d have thought my odds of contract malaria would have been far lower in the mountains than the dank, dark sweaty forest, or am I being a touch too literal? [Ed: Yes]

Beyond risk and the types of animal you’re hoping to capture, on film, you have to consider another thing when choosing if and where to move… opportunity. Glorious opportunity to remove the tiles around exploration teams which do not have one of your photographers in, thereby isolating them from the jungle, removing them (and their owners scoring opportunities) from the map. Rest assured, if you try it too early, then you opponents will pick up the animal tiles when asked, forcing the leadership totem to move on before their team can be entirely cut off. However, when the party you’re leading gets smaller, perhaps you and your friend, along with pushing your daring-do to longer and longer animal chains, can agree to ‘playfully’ hobble your opponents? After all, it’s kind of their fault this ever came to be, I’d argue. They left you alone in the jungle. Of course you went mad…

Why do I think of this as an ‘upgrade’ to Incan Gold and the feelings that wonderful classic generates? It’s such a commonplace & obvious comparison, it is the lens I will use for our final analysis. To enable that however, let me describe the Bruno Moon classic. Consider it elective reading if you’re familiar with the game.

Incan Gold, recently rebranded as Diamante, pits you as individual tomb raiders, vying to acquire the most booty from three expeditions. In Diamante, there is no leader, the decision to proceed or run away and grab stuff being taken independently, simultaneously and secretly. Should multiple players choose to run, they split the treasures exposed so far evenly, rounding down, excluding high value ‘idols’ which can never be claimed as a result of cowardice. The expedition then continues, a new card being flipped and seeded with moolah. Why run you ask? Well, there are hazard cards in the deck and if two matching hazard cards are exposed in any given expedition, everyone remaining in the expedition runs away SO quickly, they can’t claim any of the swag. In short, simultaneous action selection combined with push your luck and something akin to Prisoner’s Dilemma. Worthy, fun and now, for me, surpassed.

The first element Costa Rica elevates beyond its forbearers work is that it more cunningly delivers tension, a chain of ‘take or pass’ decisions building up anticipation for the party leader until they get the release of first dibs on the next tile, or the thunderous gut-punch of having their haul to date torn from their clutches. In Incan Gold, the tension-release cycle is much more rhythmic, simultaneous action selection leading to betrayal (or not) and repeat. It’s undeniable that you get the odd cacophony of laughter when something particularly noteworthy happens, but by and large the older title doesn’t generate the feeling of pressure in quite as considered a fashion.

Secondly, the presence of a board and the opportunity for isolating expeditions is a fantastic addition of interaction to the broth. In Incan Gold, your openings for affecting other players are strictly limited to jointly establishing how big the number on the bottom half of a fraction is, put plainly ‘how many ways the booty gets split’. It’s good fun, but it doesn’t actually afford me a way of ‘hurting’ you without committing an act of self-harm. In Costa Rica, there is no more enchanting thrill than leaving a team of photographers stranded in the wild, their avenue for capturing snapshots eliminated and their families destitute. Good, old fashioned, family fun.

Finally, the end-game scoring is fundamentally more interesting to me than ‘how much money do you have hidden in your tent’. Albeit at the cost of the tinniest touch of simplicity in the closing calculations, the awards for diversity and depth coupled to the openly visible hauls afford the players to snipe uniquely valuable tiles from each other during play. It’s still absolutely possible to score well, so proceedings ultimately feel constructive in nature, in keeping with the family audience for this title. However, it’s possible to stick your elbows out, should the players so wish.

The only scenario where I could see myself preferring Incan Gold is if I needed something I could play whilst travelling, such as on a train. Setting up the randomised board and the space necessary for displaying the player score piles limits the portability of Costa Rica. A fringe consideration, but one worth noting, depending on your requirements.

The other scenario I could see Incan Gold winning out is if (m)any of the participants are adverse to direct confrontation. This is Incan Gold, made mean. I love it for that, as it generates decent raillery, fantastic tension and bruising lows, but you may not. I would state you have every right to be wrong.

In conclusion, if you haven’t got Incan Gold/Diamante, buy this. If you do have one of those titles, but it doesn’t push your spite buttons, buy this. If you love Incan Gold for its party game style laughs and absolute simplicity of scoring, stick with what you’ve got, as this title delivers its tension a bit more sophistication and brutality, akin to velvet covered knuckle duster.

Costa Rica, at the time of printing, is available at all good retailers and possibly some lousy ones too.

Craig Taylor is a player of games, who thinks about inconsequential things far, far too much. With a vaguely personable attitude, questionable personal hygiene and the presence of mind to be cognizant of the former, he spends most his time in darkened rooms, hoping to trap fellow ne'er do wells into playing Kraftwagen with him.